I should do nothing bc

Now I realize that most of you see ‘bc’ and think ‘Before Christ‘, and although I totally agree with that statement as well, when I say “it was bc” or “I shouldn’t do that bc”, I’m saying before coffee.

I need to make some thing perfectly clear, I am not now, nor have I ever been, a morning person. Some people might argue that point, because they’ve come into work* at 8:00 am, after I’ve been there for hours, knowing I was at work around 6:00 am, as I always try to get as early a shift as is allowed. What they may not have known was I select these early shifts, not just to benefit me, but so they do not have to deal with ‘morning me’. Let me explain:

That is the majority of the reasons for why I have always volunteered to work the early shifts, even though they start at a time when I would much rather be sleeping. 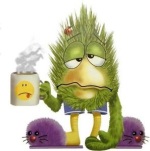 and he has blessed me with the ability to stay home and take care of him, so I do not have to go out into the world, most days, until I am mentally prepared (those who know me can stop laughing now). Since I love my husband, I do not want to be snarky to him, even first thing in the morning. Therefore, (and all the Bent Tree people said ‘what’s it there for?’) I do what I can to mellow out, and a cup of coffee is the perfect thing. There have been times when I’ve had hot chocolate or tea instead, and they are nice, but to me, there is just something therapeutic about a nice cup of coffee.

The other reason has to do with the state of mind it puts me in******. It helps me focus, and it warms me up******* to the idea of being awake, because I do like my sleep. However, I do also realize that it is also simply part of my morning ritual, and I am a creature of habit; I like my routines********.

So, if you read something I post and it makes absolutely no sense at all, it is a safe bet that I typed it bc – you have been warned 😉