I have spent the last several months reading everything I have been able to get my hands on, and watching documentary after documentary. I’ve been up and down on the emotional roller coaster, yet again, with how I’m so sick and tired of not getting everything I need from the medical field, but even more so about how industries with enough money can influence what we hear from the government on things that really matter. *sigh* I’m not going to go into a rant here, on this, I promise, at least not this post.

One of the books I’ve started reading, is How Not to Die, by Michael Greger, MD. I am really enjoying reading it, but last night, I had the pleasure of hearing him speak, and meeting him in person. It was really what I needed to give myself a bit of a kick, to stop talking about moving from being vegan to being a plant-based vegan. I may have mentioned before that you can be vegan and not plant-based (Oreos are vegan), and you can be plant-based but not be vegan, or you can be a plant-based vegan. Confused? Yeah, I thought so. Being vegan is a lifestyle of doing as little harm as possible, although people do not always apply that principle to themselves. Granted, many vegans are healthier than the average person, yet, there are plenty of junk-food vegans out there who could use a salad now and then. People who are plant-based, typically are so either because of environmental issues and/or health issues. Plant-based eating has been documented as halting, and in some cases, even reversing many health issues, including heart disease, and Type 2 diabetes.* Being a plant-based vegan means you are doing it for all the reasons, the animals, the environment, and for better health.

Now that I’ve cleared that up, well…let’s hope I did, what is the point of this post?! I gave

up meat October 12, 2015, went completely vegan December 1, 2015**, at which time I started talking about wanting to go plant-based. I took a class, I’ve learned how to cook plant-based, I’ve been doing everything but committing to it full-time. Yes, I’ve done it some, but moderation really isn’t going to take care of all of my health issues, I need to commit. I’m super good at ‘preparing’ for something. I can research the crud out of a topic, what all the stuff, and talk about it until everyone, including me, is bored to tears on the subject. So, after listening to Dr. Greger speak, I decided I’ve done enough of the preparing, it’s time to do it.

Monday, March 21, 2016, begins a 2 month personal challenge. I have all the tools, skills and the ability, I just have to get off my lazy arse and do the work. As a food item is finished in our house, that I am able to make, e.g. ketchup, mayo, spaghetti, I have to make a whole-foods, plant-based version of it. I cannot go to the store and purchase it, I actually have to make it. I am borrowing my mother-in-law’s bread maker, and I’m taking a class on making homemade baguettes and pizza dough soon, so no reason I cannot make those items as well. Things I do not have the ability to make, and there truthfully isn’t that much, I can purchase, as long as it is WFPB.

We go out to eat a few times a week, so to cover that, I will pick the item that fits the WFPB 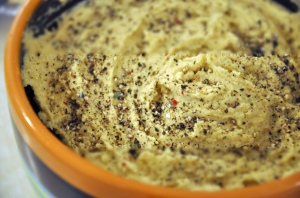 way of eating to the best of my ability. That may mean getting a salad with a side of balsamic vinegar instead of dressing, or humus instead of french fries. My fat intake will be lower than it has been, and will be from things such as avocados, nuts, or olives instead of olive oil.

You may be asking yourself, ‘Is this really a challenge?’ and I will tell you that yes, yes it is. Have I mentioned that I’m basically really lazy? I don’t mind cooking, but I also like things that are simple. Open a can of chickpeas, open a bottle of ketchup, someone has already done all the hard work, I just have to take it off and finish it up. So, for me, this will definitely be a challenge, and it is one I’m honestly wondering if I’ll be able to do it, or if I’ll fold the first time I have to make my own pasta.

There is no ‘prize’ at the end, but I should feel better, and I am hoping that once I come to the end, it will be so much a part of my routine, I will continue on with it. We shall see.

*One of many articles can be found here. Also check out Prevent and Reverse Heart Disease.
**Since going vegan, I’ve not had any stomach issues, at all. I honestly cannot remember a time, in my life, when I went longer than 3 weeks without having a stomach issue, most of the times it was multiple times a week.

One thought on “It’s time to nut up or shut up!”